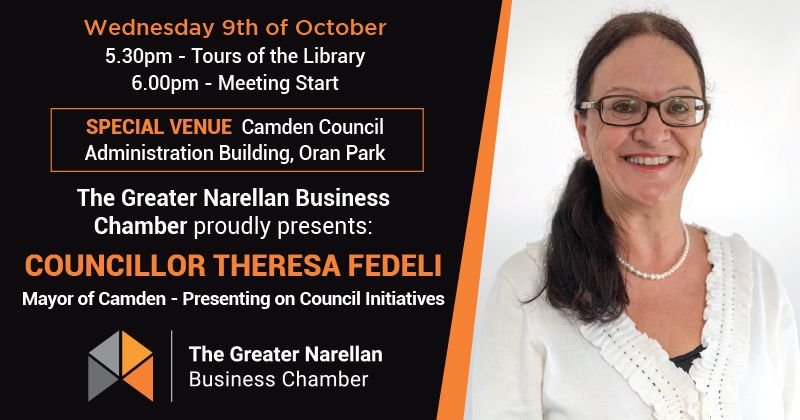 Written by Executive on October 17, 2019. Posted in Minutes.

Jean advised the Minutes from 14 August and 10 September 2019 were on the website and were moved by Pania Gregson, seconded by Renee Garcia and accepted.  No business was arising from those Minutes.

Amy presented the Treasurers Report as at 30 September 2019.  Current total bank balance is $201,375 – mainly due to the sponsorships coming in for Christmas in Narellan.  Net Profit being $2,794.  The report was moved by Geoff Ellis, seconded by Shaun Pereira and accepted.

An email has gone out to a lot of Chamber members offering to update their details and information on the Chamber’s website.  Please reply to the Administration Assistant who will assist to get this done for you.

Current membership is 185 financial members.  Will be following up the 14 that haven’t yet renewed.

Member’s spotlight video was shown by The Lighting Centre.

Shoutouts of thanks to current members – The Lighting Centre, and Camden Mowing.

A video was shown of the updates and developments at the Macarthur BDC.  Shaun also congratulated the 2 successful scholarship recipients that are currently working with the BDC – Camden Mowing and AbFab Event Decorations.

Sue acknowledged all the sponsors – Gold, Silver and Bronze.  And the Support Partners and Media Partners.

Sue then introduced the evenings Silver Sponsor for their presentation:

Mayor Fedeli gave an update of what’s happening in Camden.

The Christmas Party is booked for Wednesday, 11 December and the venue will be advised.

There being no further business, the meeting was closed at 7.51pm.