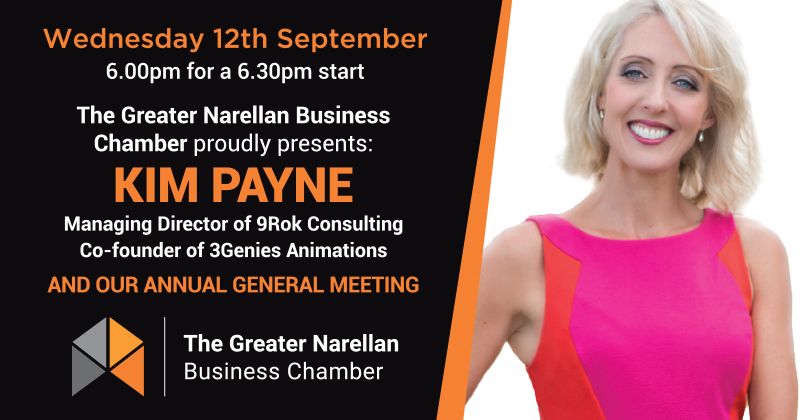 Written by Executive on October 8, 2018. Posted in Minutes.

Maria Scattergood and Adriana Care were noted as apologies.

Geoff presented the Treasurer’s Report as at 31 August 2018. The Chamber is in a healthy financial position.  The report was moved by Shaun Pereira and seconded by Leanne Wolf.

Amy advised there are 166 financial members and welcomed our 6 new members:

Amy announced that the next Welcome to Chamber meeting will be held in October.

Sue thanked our Platinum, Gold, Silver, Media and Support sponsors for the 2017/18 year.

He reflected on the past 12 months and some of Chamber’s achievements:

Brett advised that an area of focus for Chamber this year is internal governance and administration. Hence, a new Board role, Governance Director, and the approval of a paid part-time administration person, to allow the Board to focus on more strategic objectives and delivering better value to members.

Brett reminded members that one of the items for voting on tonight will be the proposed amendment to the Constitution relating to the objectives of the Chamber.

Brett acknowledged and thanked Board members who will be stepping off the Board – Maria Scattergood, Geoff Rogers, Amy Woodley and Belinda McLean – as well as those who have nominated for election. He announced that he is also stepping off the Board.  Brett particularly acknowledged and thanked his predecessor, Maria, for her sincere dedication to the Chamber and her role as President.

Brett’s report was moved by Josephine Byrnes-Luna, seconded by Geoff Rogers and accepted.

Brett then handed over to Returning Officer, Anne Parnham, to facilitate the AGM.

Returning Officer, Anne Parnham, welcomed members and guests and introduced Josephine Byrnes-Luna as the official Scrutineer. She advised that members should have been provided with a Ballot Paper on arrival and asked members to indicate if they did not receive one.

Secretary, Pania Gregson, asked for someone to move that the minutes of the 2017 AGM be accepted. Moved by Geoff Rogers, seconded by Amy Woodley and accepted.

Treasurer, Geoff Rogers, presented the audited accounts for the 2018 financial year. His report was moved by Amy Woodley, seconded by Geoff Ellis and accepted.

Election of the Board of Directors

Anne declared all positions vacant. Nominations were called, and received for all roles as follows:

Where only one nomination was received for a position, Anne declared that these positions have been filled. For positions where more than one nomination was received, members were requested to cast a vote to select one candidate for each position.  Members were reminded that they must be a current financial member to be eligible to vote and only one vote per member would be accepted.

Nominees were invited, in alphabetical order, to address to the members.

It was proposed that clause 4 of the Constitution, ‘Principles and Objects of Chamber’ be amended to better reflect the mission, objectives and values of The Greater Narellan Business Chamber.

Members were asked to vote for or against the motion to amend the existing clause:

4 Principles and Objects of Chamber

4.1 To retain expenditure within our economy.
4.2 To encourage further business development within our area.
4.3 To create employment within our local area.
4.4 To increase membership and community awareness.

4.1 To support businesses maximise their potential.
4.2 To passionately advocate for businesses in the region.
4.3 To keep members apprised of the market conditions in which we operate.
4.4 To give back to our community.

Anne called a break to enable ballot papers to be handed in and votes counted.

Results of the Voting Process

Anne announced the newly elected members to the Board:

For the motion to amend Clause 4 of the Constitution, Anne announced that of the 56 votes received, 52 members voted for, 2 voted against and 2 abstained. The motion was passed.

The AGM was declared closed at 7.40pm.

Shaun thanked Anne Parnham and Josephine Byrnes-Luna for facilitating the AGM.  He welcomed the new members to the Board and thanked the outgoing Board members, with a special thank you to outgoing President, Brett McGrath. He also acknowledged newly appointed Honorary Life Member, Ian Wolf.

He believes that the Chamber is very fortunate to have had hard working, professional board members in the past who have left the Chamber in a very good position, both financially and with the relationships that have been nurtured with various levels of government, members and the local business community.

His focus, and the focus of the Board, will be to:

Shaun advised that the committee is headed up by Amanda Good of Good Events. Paulini, of Australian Idol fame, is the headline act.  $60K has been received in sponsorships and more spots are available.  A thank you event for sponsors will be held on 31 October and attended by Paulini.

Kim highlighted the importance of the human relationship in business. She suggested that the acronyms BSB (business to business) and B2C (business to customer) be replaced with H2H (human to human).

Some of the key points included:

Shaun thanked Kim and presented her with a gift.

Donated by the Media and Support sponsors – $200 gift voucher, won by Greg Cooper from Geolyse.

Three lucky members were drawn to present a 1-minute video at the next meeting. These were Brad from Lifeline, Andrew from Combined Real Estate and Natalie from Coutts Solicitors and Conveyancers.

The next meeting will be held on Wednesday, 10th October 2018 at The Australian PlantBank, with special guest speaker, Graham Ross.  Arrival from 6.00pm for a 6.30pm start.

There being no further business, the meeting was closed at 8.54pm.