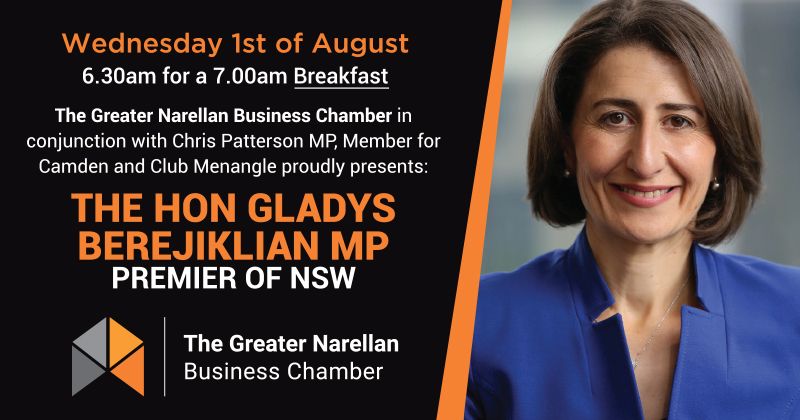 Written by Executive on September 12, 2018. Posted in Minutes.

Chris Patterson welcomed The Hon. Gladys Berejiklian MP, Premier of NSW to our region and thanked her for attending the Chamber’s event. He then handed over to the Premier.

The Premier provided guests with an insight into the priorities of the State government which includes ensuring that funds are made available to support the farmers during this drought period.

The Premier happily answered unsolicited questions from the audience.

Maria thanked the Premier and presented her with a gift and flowers.

Two bottles of champagne signed by the Premier were the lucky door prizes.

A signed Sir Donald Bradman photo collage was auctioned.  Stephen from Hume Building was the winning bidder at $2,500.00.  The monies raised from this will be donated at the White Ribbon breakfast.

Maria thanked attendees, the Premier and the venue.

The next meeting will be the Annual General Meeting to be held on Wednesday, 12th September 2018 at Harrington Grove, arrival from 6.00pm for a 6.30pmstart.

There being no further business, the meeting was closed at 9.00am.