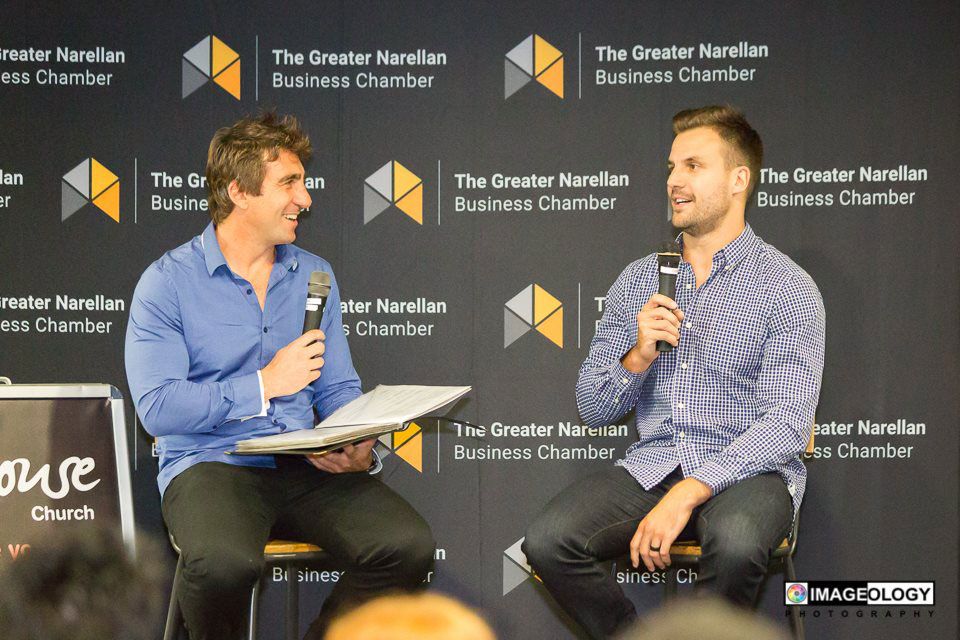 Written by Executive on October 24, 2017. Posted in Minutes.

Maria welcomed members and guests. Life members, current sponsors and board members were also acknowledged.
Maria advised that she and other executive members attended the World Chamber Congress.
Maria thanked Pearl Studios for providing a photo booth for attendees to have photos taken with guest speaker, Beau Ryan.

Pania advised the minutes from the previous meeting held on 18 September 2017, and all future meetings, will be available on the new website. The minutes were moved by Brett McGrath and seconded by Geoff Rogers.

Geoff presented the Treasurer’s Report as at 30 September 2017. The Chamber is in a
healthy financial position. The report was moved by Rob Toscano and seconded by Pania
Gregson.

Geoff advised that sponsorship is now closed as all sponsor opportunities have been taken,
including 12 hospitality providers. A short video was played. Maria acknowledged and
thanked the Christmas in Narellan Committee.

Amy advised there are 187 financial members and welcomed our 6 new members:

Rob updated attendees about Camp Quality esCARpade 2017 drive from Port Macquarie to Toowoomba to raise funds to provide programmes and services to children with cancer.

A short video was presented.

A short video of Beau’s Footy Show work was played before he was interviewed by Pastor Paul Stevens from Lifehouse Church.

Born 11 May 1985, Beau played for the Cronulla-Sutherland Sharks and the Wests Tigers. Beau joined The Footy Show in 2009 and is known for his comedic work as well as interviewing celebrities such Arnold Schwarzenegger. In 2014, Beau was forced to retire from football due to a neck injury. In 2014, Beau released a single, “Where You From?” featuring Justice Crew.

This year, he participated in the new TV series, Ninja Warrior, and next year will star in a feature film. Beau also announced that he is about to perform in the musical, Grease. Beau mentioned that he has launched a sunglasses brand and advised that he donates to charity.

Beau and his wife, Kara, have two young children, a 41⁄2 year old daughter and 10 week old son, both of whom he adores.
Beau stressed the importance of networking and meeting people as well as endeavouring to surround yourself with people who are genuinely positive and supportive.

Maria thanked Beau and Pastor Paul and they were both presented with engraved gifts donated by The Strictly Limited Company.

Donated by Macarthur BMW – a bottle of Dom Perignon, won by Peter from Kelly Partners.
Donated by Hillross – 2 bottles of wine, won by Michelle from RAMS Home Loans.

Maria thanked the speakers and attendees and advised that Kendra Strudwick will be the guest speaker at the November meeting speaking on The Neuroscience of Networking.

The next meeting will be held on 8 November 2017 at Harrington Grove Country Club, arrival from 6.00pm.

There being no further business, the meeting was closed at 9.12pm.