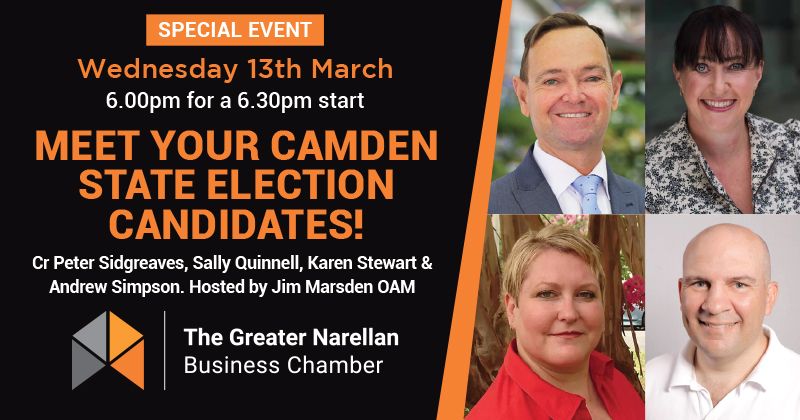 Shaun invited members and guests to introduce themselves to the Board members and raise with them any suggestions or concerns.

Shaun welcomed to the front of the room Mr Matt Leighton – Life member and Past President (24 years).  Shaun announced that tonight was the 35th anniversary of The Greater Narellan Business Chamber.  Matt shared a few memories and asked fellow Life member Mr Tony Perich AM to join him as they cut the cake for the anniversary.

Shaun updated the Chamber on recent developments and that the Board members had been busy developing plans for the future and networking in the community.

Jean advised the Minutes from 13 February 2019 were on the website.  The Minutes were moved by Pania Gregson, seconded by Amy Woodley and accepted.  No business was arising from the Minutes.

Renee advised there are 186 financial members and welcomed 4 new members:

There will be a Welcome to Chamber event in April for everyone that has joined in the last 12 months – information will come out soon.

The Chair of the Camden Region Economic Taskforce (CRET) addressed an article by the Greens NSW Candidate which was published on a recent social media forum.

The CRET Chair then provided an update on:

Sue introduced the Sponsor presentations for the evening:

Jim welcomed the panel to the stage:

Jim explained the rules of the panel discussions.

Q to Andrew Simpson
Examples of poor planning and opportunities

Q to Karen Stewart
Trains, should they come down to Oran Park

Q for all
What is the current jobless rate in Camden

Jim Marsden then asked Sally Quinnell, Andrew Simpson and Karen Stewart for their answers to the same question

Eva Campbell (local Camden business) to All
– Whats your attitude to IHAP (Independent Hearing and Assessment Panels), and what would the other 2 party candidates cross the floor for

Jim Marsden thanked the panel for attending and being part of tonights Q&A.

The Chamber presented the panel members with small gifts of appreciation.
Please note all panel members declined to accept the gifts.

Donated by Office Builders – won by Garth Lewis of Alpha IT

Donated by Marsdens Law Group – won by Paul from Maytek IT

The next meeting will be held on Wednesday, 10 April 2019 at Rydges Campbelltown.  Guest speaker will be Ryan Felsman of CommSec on current finances and budgets.  Arrival from 6.00pm for a 6.30pm start.

Shaun thanked everyone involved in getting the meeting ready for tonight and the members and guests for attending another great meeting.

There being no further business, the meeting was closed at 8.55pm.