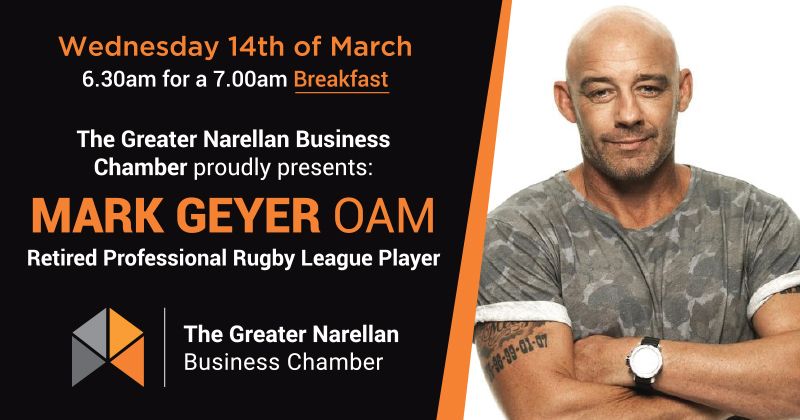 The meeting was opened at 7.00am by Vice President, Shaun Pereira.

Adriana presented about the history of Coutts and how it has grown since 1999 to now five offices.  Adriana said that one of her greatest learnings s that making mistakes is good because you can learn from them.

Belinda McLean who recently took on the role of General Manager spoke about her new role and about the culture at Coutts.  She said there is a great team who know their clients.

Alexandra Johnstone is a new partner in the business and specialises in Commercial Law.  She gave a background of her work history and her role in Coutts.

Amy advised there are now 200 financial members and welcomed our 9 new members:

Brett presented the Board’s recommended changes to the Constitution around the Chamber’s objectives.  Members will be asked to vote on these at the next meeting.

Mark Geyer is a former Penrith second row forward, a state and national representative player and a current rugby league media identity.  His club career spanned from 1986 to 2000, where he played with Penrith, Balmain and the Western Reds.  In 2000, he was awarded the Australian Sports Medal for his contribution to Australia’s international standing in rugby league.  He is now a co-host of MMM’s Grill Team.

Mark advised that he turned 50 at the end of last year and has 5 kids ranging from young adults to primary school age.  He is very proud to be a boy from the West.

He talked about his emotions getting him through trials on and off the field both in a good and a bad way.  He used his anger on the field to play hard.  However off the field – and in particular when his best friend (who was also his brother-in-law) was killed in a car accident – his emotions affected him badly.

He loves his family and knows how important his parents and wife are in his life.  He believes that to succeed you must have a good partner, whether it be in business or in life, and he acknowledged that in his wife.

Trevor Robinson auctioned “You Must Remember This”, a limited-edition State Of Origin 1991 caricature, personally signed by Mark Geyer and Wally Lewis.  Tony Perich’s generous winning bid of $1,000 will be donated to MS research in the local area.

Chamber Life Member, Tony Perich AM, stood up and congratulated the Chamber for reaching 200 members.  He said the Executive is doing a great job and thanked them on behalf of all the members for the work they are doing.

The next Chamber meeting is on Wednesday, 11th April, at Harrington Grove, with special guest speaker, Dr John Hewson.

There being no further business, the meeting was closed at 9.00am.