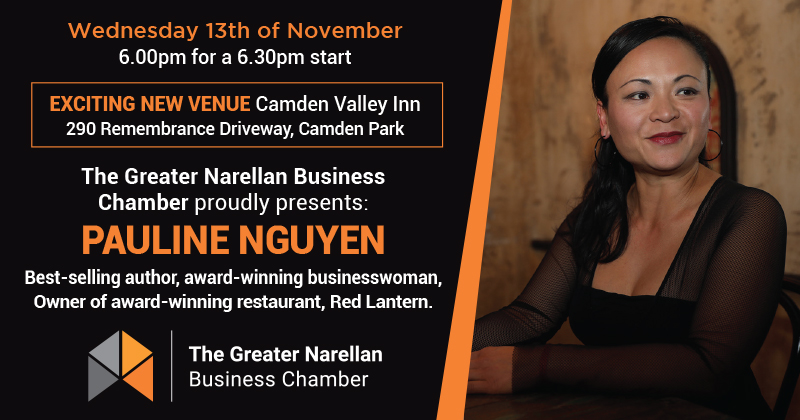 Best selling author, award-winning businesswoman and owner of Red Lantern, the most awarded Vietnamese restaurant in the world. Pauline Nguyen presents “The Red Lantern Story” – from extreme adversity to success.

Pauline is the owner and co-founder of Red Lantern, the most awarded Vietnamese restaurant in the world. Pauline is one of Australia’s most successful entrepreneurs – but with difference. She is inspiration with substance. She teaches with warmth and humour, telling her own story of what can be achieved through key alignment of thoughts and intentions.

Pauline is also a best-selling author and award-winning businesswoman – and her achievements are all the more impressive for her having escaped Vietnam on a boat and survived a Thai refugee camp. She has overcome these adverse beginnings to transform her approach to success by re-engineering her beliefs, questioning the status quo and hacking cultural norms.

In 2012, Pauline and Red Lantern won the Australian Telstra Business Award for Medium Business.  But that is only the tip of the iceberg when it comes to Pauline’s achievements; her memoir, Secrets of the Red Lantern, has been critically acclaimed around the world and appeared in numerous bestseller lists. She holds a BA in Communications from the University of Technology, Sydney, and in 2008 won Newcomer Writer of the Year at the Australian Book Industry Awards.

To become one of Australia’s most successful entrepreneurs takes hard work, determination, inspiration and substance. It also takes the courage to defy conventional wisdom and the tenacity to get back up again, no matter how many times life knocks you down.

Pauline’s unique life experiences have given her a distinctive insight into the minds of individuals and businesses alike, and we look forward to hearing her keynote address “The Red Lantern Story” – from extreme adversity to success.